Populations of mule deer across much of the West have declined or remained relatively stagnant, while at the same time, populations of elk have increased. Several ideas have been brought to the table to explain why mule deer are doing poorly such as predation and drought, as well as disease. However, more recently, questions regarding what effects elk may have on mule deer have come to the surface. With the Deer-Elk Ecology Research (DEER) Project, we aim to identify the roles of predation, habitat conditions, and disease on survival and reproduction of mule deer in the Greater Little Mountain Area, a high-desert ecosystem of southwest Wyoming. Further, our goal is to understand if elk who occur in this same system compete with mule deer for food resources and space, and if so, how that effects population dynamics of mule deer.

We expect that predation, habitat quality, and disease all play a role in limiting mule deer in this system. However, we suspect that the presence of elk on the landscape effects how mule deer use space, which may also have implications for survival and reproduction. For instance, if elk occupy areas that are good quality habitat, and deer avoid these areas because of the presence of elk, mule deer may be forced to use low quality habitat resulting in poor nutritional condition that translates to poor survival.

Do coyotes key in on fawns during the birth pulse of mule deer?

Coyotes have been implicated as the primary predator of newborn ungulates in many systems across North America, however, the behavior of coyotes that supports their ability to be a primary predator is not well understood.

How're we tackling it?

To understand the behavior of coyotes during the birth pulse of mule deer, and whether such behavior supports their ability to be an effective predator to mule deer fawns, we used GPS data from coyotes to assess habitat selection and movements of coyotes relative to the distribution of mule deer fawns on the landscape.

What are our findings? 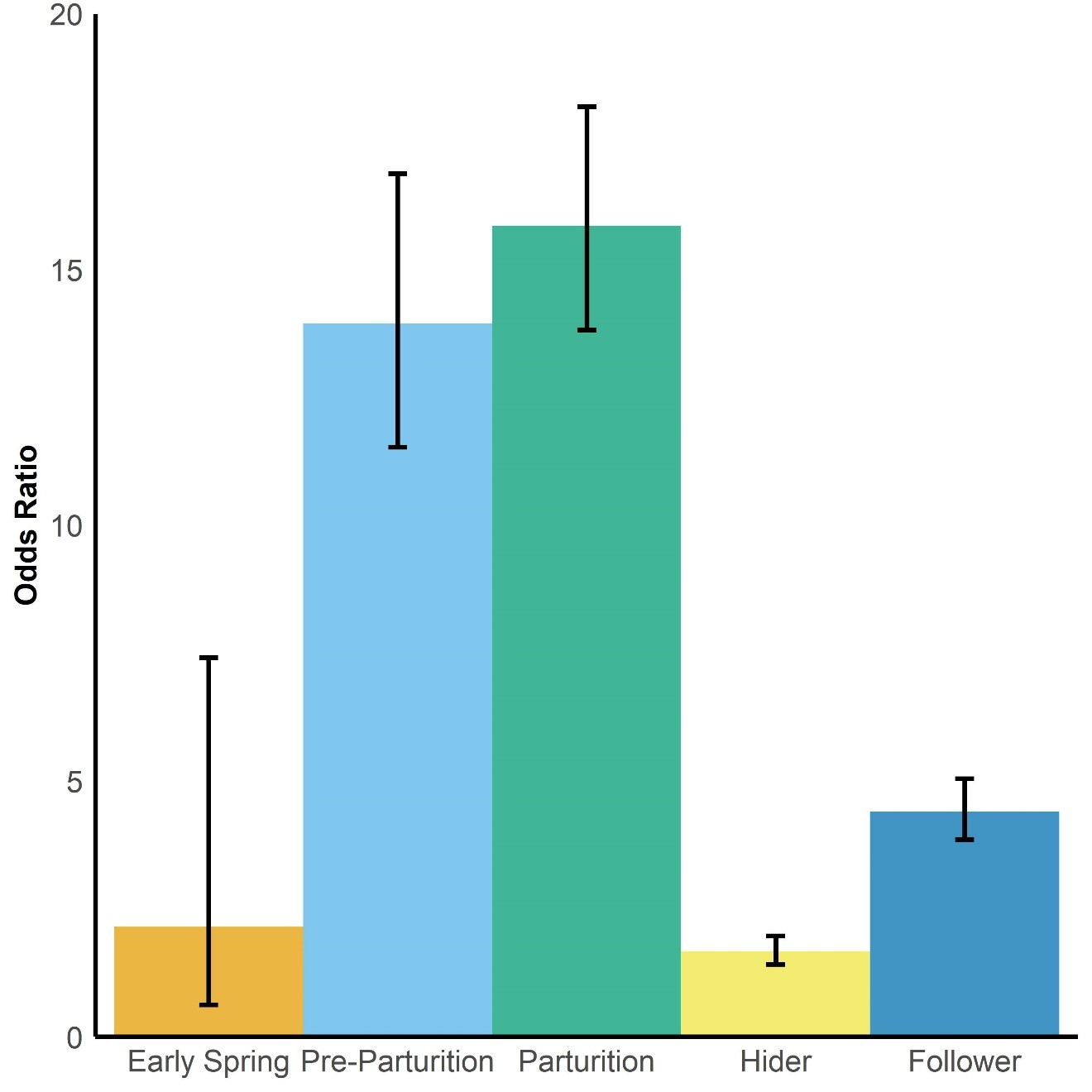 Selection by coyotes of areas that deer used at different reproductive stages.
Our findings highlight behavior of coyotes and how it lends to their ability to be effective predators to fawns. If coyote predation to newborns has an additive effect (i.e., fawns would have survived if it weren’t for predation), and the goal is the reduce predation pressure, managers should take careful consideration into the pervasive shifts in habitat selection and the timing in which it occurs if a control program were to be put into place.

What role do habitat conditions and nutrition play in dynamics of mule deer and elk in the Greater Little Mountain Area?

Quality habitat is needed to support viable populations of both mule deer and elk. The conditions of both winter and summer ranges for these animals and the effects that it plays on both neonate and adult survival is crucial to understand factors that are limiting mule deer, and supporting populations of elk.

How're we tackling it?

To understand the link between habitat, and vital rates of both mule deer and elk, we conduct intensive monitoring of individual mule deer and elk throughout their lifetime, and measure a number of metrics of survival and reproduction.

Reproduction and Nutritional Condition: We capture mule deer twice a year, once in the spring just as animals are coming off of winter range, and again in the fall when animals are coming off of summer range. During captures, we measure a number of things that allow us to get a better look at survival and reproduction including: pregnancy status (spring), fetal development (spring), as well as fat levels that are measured via ultrasonography (fall and spring). The dual capture techniques allow us to evaluate seasonal changes in nutritional condition, and gives a picture of the quality of an animal’s home range.

Neonate Capture and Monitoring: We began capturing and monitoring mule deer fawns belonging to our collared individuals in the Spring of 2016 and continued every summer through 2019. We also captured elk calves belonging to our collard female elk in the summers of 2017 and 2018. We monitored neonates throughout their lifetime, and investigated mortalities as they occurred. Capturing neonates and monitoring their survival allows us to make connections between mom’s nutritional condition, and how that influences survival of neonates.

What are our findings?

Nutritional Condition: As we expected, female mule deer put on fat during the summer, and lose fat over the winter. However, the degree of fat gain and loss varied by year. The summer of 2018 was a season of intense drought. In fact, precipitation in July 2018 was less than half of the average precipitation for that time of year. Those drought conditions accelerated dry-down of many shrubs that are important to deer and elk during the summer including mountain mahogany and antelope bitterbrush. Consequently, female mule deer did not gain any fat during the summer of 2018—mule deer entered the winter of 2018-2019 with the same amount of fat that they came out of the winter 2017-2018. Things changed in the summer of 2019, however, and the severe winter of 2018-2019 and the prolonged moisture in the spring of 2019 extended the green period for mule deer and elk, and in November of 2019, deer were the fattest that we had observed since the beginning of the study. 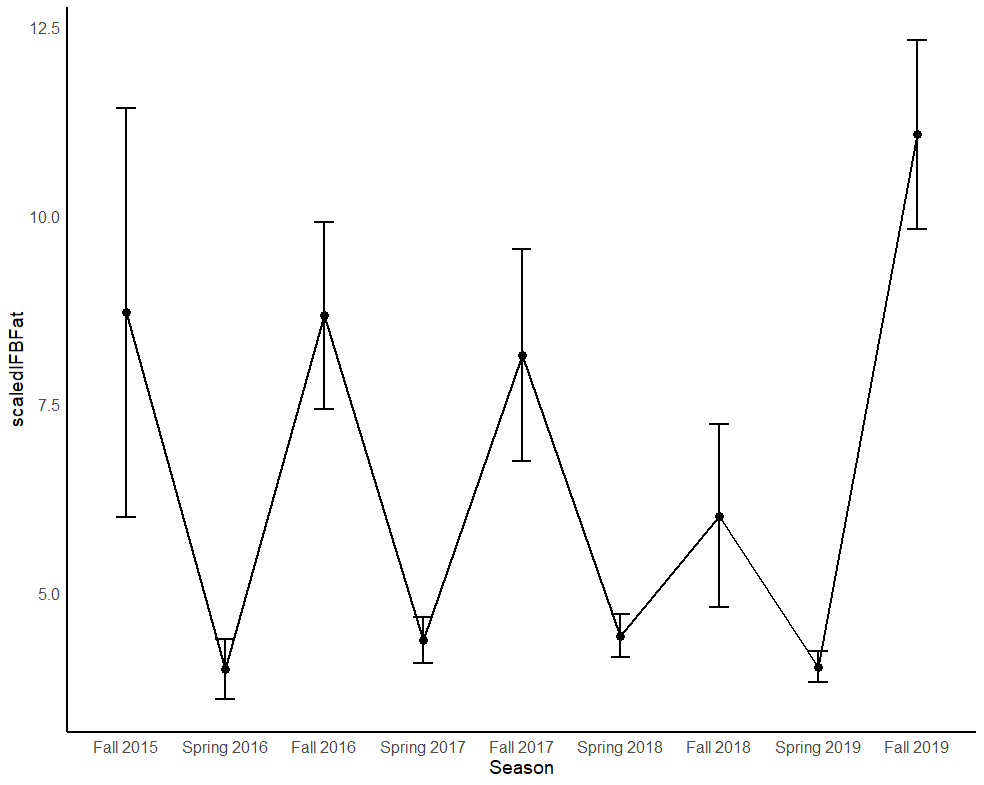 Changes in percent body fat of female mule deer of the Little Mountain Area across seasons.

Neonate Survival: We began capturing and monitoring mule deer fawns belonging to our collared individuals in the Spring of 2016 and continued every summer through 2019. We also captured elk calves belonging to our collard female elk in the summers of 2017 and 2018. We monitored neonates throughout their lifetime, and investigated mortalities as they occurred. Capturing neonates and monitoring their survival allows us to make connections between mom’s nutritional condition, and how that influences survival of neonates.

Mountain Shrub Surveys: We are currently in the process of analyzing the data from our surveys of mountain shrubs, but the general message is that the condition of mountain shrubs is quite poor— must shrubs were severely browsed, and little to no reproduction was occurring; this was especially true in chokecherry shrubs throughout the study area.

People working on the project:

Publications are in review and coming soon.

Find our other publications on mule deer