Half-way up a snow-covered hill, I stop to watch a pair of mule deer, claiming curiosity as an excuse to catch my breath. A doe and her 9-month-old fawn weave through the juniper and shrubs, turning around to see if I’ve moved any closer. I wish I could tell them to save their precious energy; I couldn’t catch them if I tried.

Earlier that morning, an email with the subject line “***Mortality Event***” and a stop-sign red message alerted me that D009, one of the mule deer I’m studying, hadn’t moved in 8 hours. She was dead, and I was on my way to investigate how she died.

Despite my attempts to travel softly, my presence scatters pockets of deer each time I crest a hill. The deer in this country aren’t used to seeing people; my boot prints are the only recent signs of human travel. As I creep down a drainage, I glance over my shoulder, and try to stop myself from hearing a stalking mountain lion in the breeze.

Through the juniper, I notice a brown mound that isn’t rock or soil. My heart beats faster. As I move closer to D009, I tread lightly, wanting to preserve evidence. I scan for subtle pads and claw marks in the snow, tufts of hair caught along a branch, drops of blood—anything that would help me determine the cause of her death. I only see hoof prints.

There were no obvious signs that D009 had been attacked or harmed by another animal. She had been walking, then suddenly tipped over. Not stumbled or laid down, but tipped over. The ridges of her hip bones and ribs were apparent, even from a distance. The adrenaline rushes out, and I sigh; I’ve seen this before. The lab would later confirm my initial read: chronic wasting disease.

I set down my pack and dug around for my knife, the one that is specific for this project. The prions causing chronic wasting disease can be removed by soaking objects in high-concentration bleach, but I’ve accepted that prions likely lurk in this knife. My chicken scratch labels bags with the samples I’ll pack out and take to the lab: spleen, heart, lungs, liver, head, fecal, muscle, kidney, marrow.

I don’t have to send anything to the lab to know that the disease wrecked her organs and tissues. Her liver was discolored and spongy: when I picked up the sample bag said to contain liver, I wondered if I had mislabeled the bag. Healthy bone marrow resembles cream cheese, but her strawberry-jelly bone marrow told me how malnourished she was, despite her full stomach. It’s February, and mule deer who are old enough to be pregnant should be. But I don’t see any signs of a growing fawn—she probably couldn’t spare the energy. Her diagnostic report that came a few weeks later was full of unfamiliar medical terms: neuronal vacuolation, bronchopneumonia, hemosiderosis. Her brain had degraded and was filled with holes. Her lungs were congested and hemorrhaged, and she had inhaled and choked on plant material. She had pneumonia, probably contracted because of a compromised immune system. Perhaps I should have left those terms unexamined.

Having collected the samples I was after, I picked up all her remaining organs and put them back in her chest cavity. It felt disrespectful to leave them scattered around. I hoped that something would come by and scavenge her organs, but nothing had been by so far—perhaps nothing would scavenge from her at all.

She spent the last months of her life in below-freezing temperatures, slowly wasting away. I wanted to remember her when I was analyzing data back in the office. My blood-covered thumb pressed the shutter on my phone, capturing her final steps through the snow.

On my hike out, I scatter more deer. I want to tell them all to run, to leave, to get out while they still can. Before they touch noses with an infected deer, and spend the next 18 months paying for it. Before they nibble on a sagebrush, and unknowingly ingest a disease that strips them of their mental abilities, leaving their head hanging and body likely to tip over at any minute. But their biology compels them to stay.

A few weeks later, a stop-sign red email commands me to hike up that same hill in search of D055, a doe we just added to our study, but has been still for 8 hours. I grab my knife and sample bags, heading to the field, knowing what I’ll find. 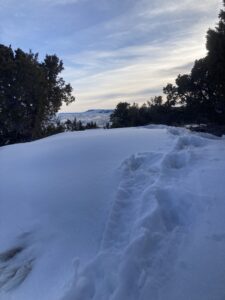 D009’s last steps through the snow.

Data and Bones and Wonder